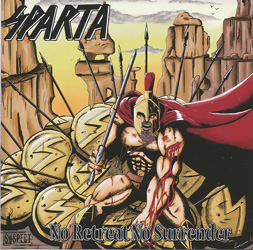 SPARTA – No Retreat No Surrender (Suspect)

The adage that you can’t keep a good band down is true, and Nottinghamshire’s Sparta are living proof. Obviously on a roll, the band are determined not to let the grass grow under their feet; ‘No Retreat No Surrender’ is their second release since they reformed back in 2013 and, like 2014’s ‘Welcome To Hell’, it features a clutch of pretty much all new material written and recorded by the original line-up of three Reders (vocalist Karl, guitarist Snake and drummer Paul) and a pair of Tonys (Foster on guitar and Warren on bass). There’s few post-NWOBHM bands that can boast that.

Sparta came into being around the end of 1979 and although they made it in some shape or form through most of the Eighties their glory days came at the beginning of the decade with the release of ‘Fast Lane’ and ‘Angel Of Death’, two highly prized and very collectable singles; their legacy also included the track ‘Lords Of Time’ on the ‘Scene Of The Crime’ compilation in 1981. Some thirty-five years later the band continue to stay true to their roots and don’t try to do anything gimmicky. Seldom is it advisable for leopards to change their spots and, as with ‘Welcome To Hell’, Sparta continue to write songs with their feet firmly in the early Eighties. And is that such a bad thing? The NWOBHM was a broad church, and there’s a wide spread of material here from the traditional metal gallop of the opener and title track – an exciting little work-out which culminates in a fast ‘n’ furious solo – through the no-nonsense riffage of the rather self-explanatory ‘Stand Up For Heavy Rock And Metal’ to ‘Dark Of Your Mind’, with its structural nod to Black Sabbath and glorious split solo. The heads-down ‘We Are Gods’ is a true metal anthem for the twenty-first century (can’t wait to hear them play it live!) and the fact that a re-recording of ‘Lords Of Time’ – a song which revels in its time-changes and guitar interplay – sits beautifully within the running order is a testament to how good an album this is, and to how good a band Sparta are.

Less an album and more a call to arms, ‘No Retreat No Surrender’ is defiant, loud and proud. As I said, you can’t keep a good band down.