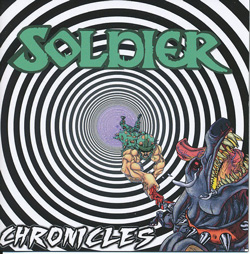 Although they didn’t record an album back in the glory days, that didn’t mean that Soldier hadn’t amassed a healthy amount of demo material by the time they hit the buffers at the end of 1983. Some of that early material was released on their ‘Heavy Metal Force’ album and now ‘Chronicles’, as the name suggests, chronicles the history of the band by rounding up pretty much everything else that they have lying in the vaults.

Things get underway with ‘Circuit Breaker’ from their second recording session, at a time when Soldier were still more in the rock than the metal mould (as if should definitions make any great difference) with a definite bluesy subtext. It’s the sound of a band still trying to find their way, and the following songs ‘Dirty Doris’ and ‘Blind Destiny’ tread the same path. With the band deciding to take on a heavier direction ‘Insanity’ marks the start of the recordings by the Garry Phillips (v)/Ian Dick (g)/Steve Barlow (b)/Ian Astrop (d) line-up responsible for ‘Storm Of Steel’ on ‘Heavy Metal Heroes’, and although Astrop would soon depart, with Steve Taylor behind the kit and second guitarist Nick Bicknell in the fold the band as it was best recognised back in the Eighties was complete; this formation would record their storming single ‘Sheralee’, but would itself not last that long. Dick left to be replaced by Nick Lashley, and Phillips would later call it a day too, his place being taken by ex-Girl frontman Phil Lewis. Everyone still with me?

There’s a lot of really exciting material on offer here, some of which may be familiar via the ‘Live Forces’ tape or the more recent ‘Live @ The Heathery’ recording from 1983. Possibly of most interest though are the two songs featuring Lewis – ‘Heartbreak Zone’ and ‘Charlotte Russe’ (“possibly the only song ever named after a dessert”!) – recorded as a demo for Music For Nations. Hardcore metallists might sniff with disapproval as ‘Storm Of Steel’ they certainly are not, but with Lewis’s trademark vocals the songs re-positioned Soldier as a more commercially viable outfit; unfortunately, not even that could save them from the inevitable.

Serving up 55 minutes of classic NWOBHM, ‘Chronicles’ should have already earned its place in any metal collection. But if that’s not enough, a bonus second disc serves up another 70 minutes of rarities, with four cuts from the Eighties and a further eight from the band’s more recent activities over the last ten years including an updated version of ‘Magician’, their very first recording,

Bands like Soldier face the conundrum of trying to look to the future while having so much invested in the past. ‘Chronicles’’ cover art neatly encapsulates this, showing the band’s new ‘Dogs Of War’ mascot – let’s call him G.I. Hogan – being dragged forwards by the dogs and backwards into the Time Tunnel (for those old enough to remember that TV show), and this depicts the way Soldier have in recent years been balancing brand new forward-looking releases like the aforementioned ‘Dogs Of War’ with cupboard-clearing backward glances like this. As interesting a time machine as it is ‘Chronicles’ marks the end of Soldier’s Janus-like approach, as from hereon in Soldier will be looking solely to the future. And given how good last year’s ‘Dogs Of War’ was, and what a great line-up the band now boasts, that’s no bad thing in itself. Trust me on this.