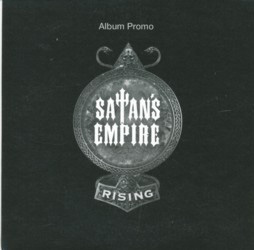 It always seemed a travesty that Satan’s Empire appeared destined to remain almost a footnote in the history of the NWOBHM. Known for just one song – but what a song! – on Neat’s ‘Lead Weight’ compilation cassette back in the day, the band were unintentionally shrouded in mystery, their details lost in the mists of time, and even when Malc Macmillan published his ‘NWOBHM Encyclopedia’ he added little of substance, just noting in his overview of ‘Lead Weight’ that their contribution ‘Soldiers Of War’ “was another highlight of the set, this epic composition coming across as broadly similar to Geddes Axe or Dealer.” As a consequence, Satan’s Empire’s reformation appearance at Brofest in 2016 was for many a highlight of the festival and the band were no disappointment, romping through a seven-song set, including (naturally) that Neat offering. So, although it’s been a long, long time coming, their debut album has been as hotly anticipated as that reformation gig. 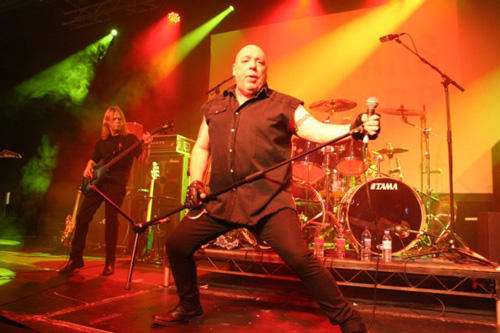 ‘Rising’ is a ten-track monster, as authentically NWOBHM as bullet belts and stripy trousers; the songs themselves, according to frontman Derek Lyon, “are all from the late Seventies/early Eighties, but have been taken apart and redone by everyone in the band” (which is, by the way, what Lyon refers to as the ‘London line-up’ – Satan’s Empire as they were after they decamped from Scotland – and features guitarists Paul Lewis and Sandy McRitchie, bassist Wayne Hudson and recent addition behind the kit Garry Bowler). Highlights come thick and fast, and it’s hard not to be bowled over by an avalanche of classy material, but to my mind ‘Dragonslayer’ and opener ‘Slaves Of Satan’ take some beating, with the anthemic crowd-pleasing ‘Shout It Out (Hail!)’ and the bikers’ psalm ‘On The Road To Hell’ also amongst the honours. And it goes without saying that ‘Soldiers Of War’ and its August 1979 demo partner ‘Suicide Man’ stand tall and proud within the running order.

‘Rising’ is both a statement of intent and a thoroughly classy exhibition of what made the NWOBHM so great. The Empire strikes back? You betcha!