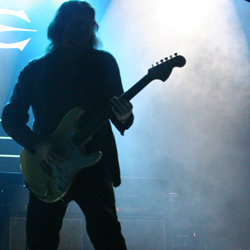 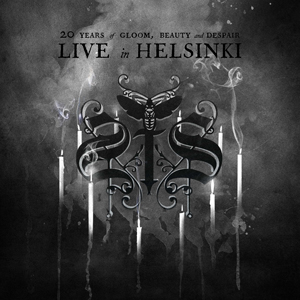 It’s austere, it’s bleak, but it is truly beautiful... SWALLOW THE SUN were supposed to be celebrating their twentieth birthday last year with an extensive European and North American tour but managed just ten dates in their homeland in February before everything went down the pan. They’d already planned to film and record their date at Tavastia Club in Helsinki on 26 February anyway, and the result is ‘20 Years Of Gloom, Beauty And Despair – Live In Helsinki’ (Century Media, 30 July), a double CD or triple LP, both with an accompanying DVD, which captures the night’s full set. It’s more than ‘just’ a live album though, given that the first set of the night is given over to an onstage recreation of the ‘Beauty’ section of ‘Songs From The North’, complete with string quartet. After a break, the band returned to the stage for a set featuring another ten songs voted for by fans, which included the likes of opener ‘Lost & Catatonic’ and the majestic ‘Cathedral Walls’ and concluded with a moving rendition of ‘Here On The Black Earth’. 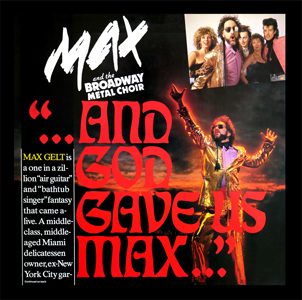 From the sublime to the quite ridiculous! Available on CD for the first time – in fact, it’s the first time it’s been made available since the original 1986 vinyl release on Powerstation Records – is ‘And God Gave Us Max’ by MAX AND THE BROADWAY METAL CHOIR (Golden Core/ZYX, 6 August). It’s a kind of spoof metal rock opera put together by Max Gelt, the alter ego of Jeffrey Michelson – journalist, Apple Records’ designer and producer of a hardcore erotic coffee table book which came close to costing him his liberty. A colourful character doesn’t necessarily make for a great musician but the resulting album does have a degree of charm, sounding not unlike Zodiac Mindwarp at times, and given the amount of parody bands doing the rounds these days (many doing very well for themselves), he was a good twenty years ahead of his time. The band features guitarist and metal guru Jan Cyrka and bassist Skidz Riddles (or Angel Witch / Tytan Kev to his mates), with then relative newcomers FM popping up on a couple of cuts. The Golden Core reissue features a handful of bonus tracks, including the version of ‘Almighty Dollar’ which appeared on the Powerstation compilation ‘Megalomania’, and is limited to 300 copies. Grab it while you can. 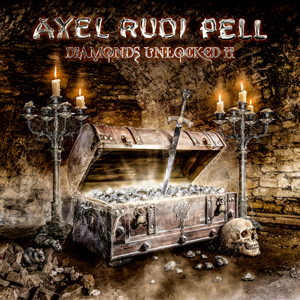 You have to hand it to AXEL RUDI PELL. As the title indicates ‘Diamonds Unlocked II’ (SPV, 30 July 2021) is his second collection of reworkings of other people’s material – not to mention odd covers on his ‘Ballads’ albums – but he can hardly be accused of picking on the usual suspects. ‘Diamonds Unlocked II’ does indeed feature his band’s take on offerings by Sammy Hagar and Rainbow, but after that the selection freewheels into lesser-known territory, and there’s not many albums on which ‘There’s Only One Way To Rock’ and ‘Lady Of The Lake’ rub shoulders with ABBA’s ‘Eagle’ and ‘Rock ‘N’ Roll Queen’ by The Subways. And OK, so ‘Paint It Black’ does fall into the ‘hoary old chestnut’ category, but this version takes its lead from the way it was played by Deep Purple on their 1993 tour with a keyboard solo that allows Ferdy Doernberg to show what he’s made of. It’s an accomplished album throughout, as you’d expect, but ‘I’ll Put A Spell On You’ is a great showcase for vocalist Johnny Gioeli, Pell himself is on fire, and the treatment of ‘Eagle’ fits in so well you could imagine that it was an ARP original.

Video clip: ‘There’s Only One Way To Rock’ - https://www.youtube.com/watch?v=Nekbrt4JvM0 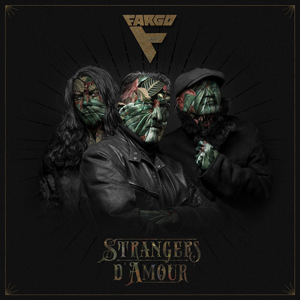 After four albums in the early Eighties FARGO called it a day, but reformed in 2017 and issued ‘Constellation’ the following year. Album number six ‘Strangers D’Amour’ (SPV, 25 June) follows in a similar vein to its predecessor, with guitarist/vocalist Peter Ladwig, bassist Peter Knorn and drummer Nikolas Fritz offering up forty-odd minutes of accessible and slickly-played melodic hard rock. If opener ‘Rain Of Champaign’ puts some bounce into the album, the slower, deeply grooving ‘Time’ adds a degree of gravitas to the proceedings and ‘Gimme That Bone (A Dog’s Prayer’) shows you can write a song from a canine point of view: sounds silly, but it works. On the other side of things, the plaintive ‘Dear Miss Donna Vetter’ in which a man mulls over a letter from his absent mother, set against an almost country backing, shows a depth of lyrical understanding and prowess. It’s quite a low-key downbeat album though, and given Ladwig’s phrasing as well it does seem to stray into Dire Straits territory at times. 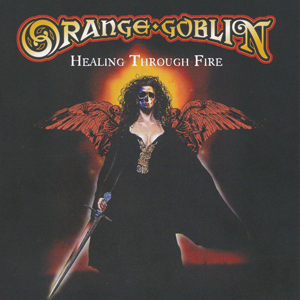 What do you get if you cross a classic album with a BBC session and a live show? The answer is the reissue of ORANGE GOBLIN’s sixth album, the much-lauded – and rightfully so – ‘Healing Through Fire’ (Dissonance/Cherry Red 20 August). Originally released in May 2007, and loosely themed around the Plague of 1665 and the following year’s Great Fire of London, ‘Healing Through Fire’ was their first and only album to be released on Sanctuary Records, the band having left Rise Above after the release of ‘Thieving From The House Of God’. A limited edition of the Sanctuary release came with a bonus DVD shot at London’s Mean Fiddler on 16 December 2006, and this new revamped package adds the audio of that gig to the original album. If that’s not enough, there’s also a session recorded for the BBC Rock Show featuring re-recordings of two album cuts and two older songs (‘Scorpionica’ from ‘The Big Black’ and ‘Blue Snow’ from ‘Time Travelling Blues’) and three demos which include a romp through The Damned’s ‘New Rose’. It’s an electrifying package, and an interesting snapshot of that period of the band.

Finally, there’s a new single from Enforcer, ‘Kiss Of Death’, a trailer for their upcoming sixth studio album, due early next year. Enjoy! https://www.youtube.com/watch?v=CW1wURBA_eg