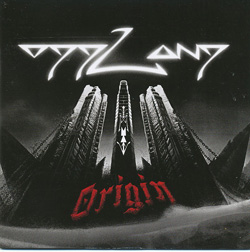 From the heavier end of the progressive metal spectrum, with weighty, thrashing riffs that assault the senses and demand attention, Oddland – their tag is “the collision of four twisted minds entwined” – come more from the point of view that progressive music should be stimulating and aggressive. Hailing from Finland, Oddland released their first album ‘The Treachery Of Senses’ through Century Media in 2012; four years later sees the band on a new label, as guitarist/vocalist Sakari Ojanen, guitarist Jussi Poikonen, bassist Joni Palmroth and drummer Ville Viitanen release their second outing on Sensory.

It’s hard to pigeon-hole Oddland – which from a band’s point of view is ever a bad thing – but popping the likes of Devin Townsend, Pain Of Salvation, Textures and Tool into a blender will give you a rough idea; and the fact that Ojanen lists a number of grunge influences shows in his vocal delivery at times, which adds another shade of black to the band’s palette. Across forty-five minutes the band’s forceful delivery and dynamic self-belief is reinforced through nine heavy-hitters, and easy listening it’s not. The band’s abrasive approach and rhythmic complexities throw down a gauntlet of challenge, and then wonderful melodies and unexpected hooks take you off your guard, as evidenced in the likes of ‘Untrue’ and ‘Skylines’, and the uplifting closer ‘Will’. ‘Origin’ is an album to be taken seriously, and cannot be dismissed with a spin or two. Unless you’re steeped in the heavier end of the spectrum day-in, day-out, it takes a while to tune into the path the Finns walk, but once you get there you’ll find the journey is one well worth taking.