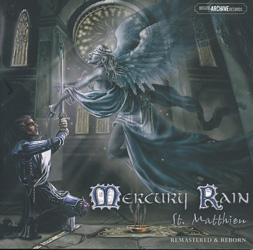 Although the UK never really embraced the Metal Female Voices genre as wholeheartedly as the rest of Europe, over the years it has produced a few bands who’ve made significant contributions to the scene. Possibly the biggest impact was made by Bristol’s Mercury Rain, a band whose credits include being the first MFV act to play Bloodstock (Nightwish headlined, but Mercury Rain graced the stage first), the first UK band to play at the prestigious Metal Female Voices Fest in Belgium, and the first to undertake a major European tour, opening for Therion. Thirteen years after it originally appeared in the racks Bristol Archive Records have rescued their third and final release ‘St Matthieu’ from the file marked ‘MIA’, and it’s a real pleasure to make its acquaintance once more.

Formed by bassist Jon Hoare and guitarist Dion Smith in 1994, Mercury Rain had little shape or form until they recruited French vocalist Sonia Porzier, who also introduced the pair to Nightwish’s ‘Oceanborn’. Now armed with both singer and direction, and with Hoare’s former bandmate Andy Pester rounding out the line-up, Mercury Rain recorded a five-track EP ‘Where Angels Fear’ in 2000 and almost immediately afterwards began work on a full album entitled ‘Dark Waters’, released in March 2003. Touring and greater self-awareness meant that their next bout of recording was sharper and more focussed, and the result was the ambitious and far-reaching ‘St Matthieu’, completed in June 2004. 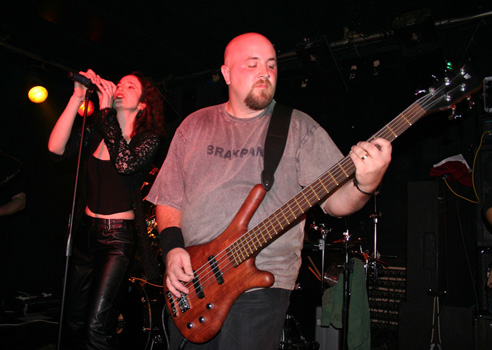 Few bands of their stature would think of kicking an album off with an intro sung entirely in French, or of roping in a male voice choir, but if Mercury Rain had a mantra it would be ‘bigger and better’, and ‘St Matthieu’ certainly showcases a band at the height of its powers. Songs like ‘Eldritch Mirror’ and ‘Chimaera’ exude confidence and display a depth of maturity, and the more provocative ‘The Messenger’ featured Four Way Kill’s frontman Chris Neighbour trading vocals with Porzier and soon became a live staple of the band’s set. The highlight though was undoubtedly the album’s title track, a song which builds over ten minutes and personifies the opulence and majesty of the band’s collective talent.

Unfortunately though, although ‘St Matthieu’ received some very fetching reviews and saw the band in its most creative phase it was also to be Mercury Rain’s swansong; line-up changes and external influences destabilised the band, and in January 2006 Hoare threw himself into staging the ProgPower UK events, and the band was no more. This ‘remastered and reborn’ edition sees the album lovingly packaged and also features five bonus tracks culled from the band’s previous ‘Dark Waters’ and ‘Where Angels Fear’ releases. And the good news is that Porzier, Hoare and one-time guitarist Rich Shillitoe are back in the studio once more, working on new material for release later this year; may Mercury Reign once more…