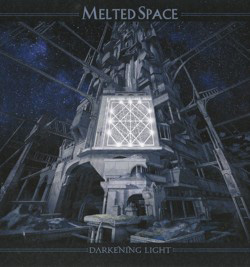 So far, so symphonic… But what makes Melted Space so attractive is that, as the opus’s composer, Le Pape never lets his vision crowd out the fact that despite all the multi-layered vocals, lush harmonies and dynamic instrumentation what counts are songs that are memorable and exciting: and ‘Darkening Light’ has these in abundance, with ‘Trust In Me’ (featuring the aforementioned Stanne and Soto and some cracking guitar work from Gildas Le Pape) and ‘Man And Future’ (voiced by Catherine Trottmann and Sakis Tolis, alongside Le Pape and Delauney) leading the charge.

Ground-breaking it may not be, but ‘Darkening Light’ does demonstrate a consistency and maturity that sets it way above many similar offerings within the genre. And for that it’s to be commended.