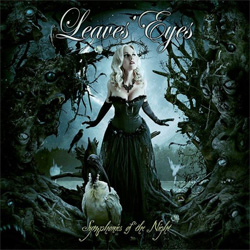 Leaves' Eyes – Symphonies Of The Night

With Leaves’ Eyes albums currently coming at two-year intervals – unsurprising given the amount of touring they do and the need to fit in some work with Atrocity, as well as a seemingly revolving door of supporting musicians and the need to re-issue every album about 25 times – 2013 was ripe for the band’s fifth full-length studio outing, and in ‘Symphonies Of The Night’ they have come up with what in all seriousness is probably their strongest album ever, and certainly the best thing they’ve done since 2005’s cracking ‘Vinland Saga’.

Like ‘Meredead’ before it the album was once again recorded as a five-piece, with the ever reliable Thorsten Bauer again handling guitar and bass duties. His Atrocity bandmates Alex Krull (vocals and producer extraordinaire) and second guitarist Sander van der Meer do what they do with flair and panache alongside 2012’s newby drummer Felix Born. Out front of course is the distinctive voice and delicate frame of Liv Kristine, who opened her account back in the Nineties with the ground-breaking Theatre Of Tragedy.

Lyrically (according to the band’s website; you don’t get such luxuries as lyrics with promos these days!) the material is loosely themed around strong women; as such, it throws up such characters as Joan of Arc (‘Maid Of Lorraine’), the not overly-popular Queen Eleanor, wife of King Henry III and the only English queen to be buried in an unmarked grave (‘Eleanor De Provence’), the murdered queen of Neustria (‘Galswintha’) and the perhaps more obvious St Cecelia and Ophelia, although how Hamlet’s wishy-washy squeeze gets into this roll-call is anyone’s guess. Musically,’Symphonies Of The Night' is heavier, tighter and more exciting than either ‘Meredead’ or 2009’s ‘Njord’; metal needs to be on the edge, and Leaves’ Eyes have been guilty of playing it safe for some time. At last they’ve re-discovered the need to be tempestuous and have come out fighting, as openers ‘Hell To The Heavens’ and ‘Fading Earth’ ably demonstrate. ‘Angel And The Ghost’ recreates the passion and the longing of ‘My Destiny’, and the title track too has a neat commercial groove that should sweep through concert halls across several continents. For those who prefer the more folky side of the band ‘Galswintha’ pulls all the fiddles, uilean pipes and dulcimers out of the hat although stays pretty much on the hard ‘n’ heavy step with Krull barking his parts and Kristine matching his vehemence line for line, while ‘Nightshade’ with its orchestral backing highlights that sometimes less is indeed more.

Good album? Great album, more like. And note that there’s a limited edition version which adds a couple of bonus cuts in ‘One Caress’ (a cover of the Depeche Mode cut) and ‘Eileen’s Ardency’ which features Kristine duetting with sister Carmen from Midnattsol.