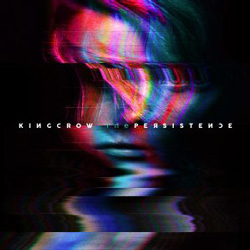 Stepping “outside of their comfort zone” (according to their biog), for their seventh album the five members of Kingcrow appear to have turned in on themselves and served up an hour’s worth of seemingly hugely introspective and densely unforgiving progressive metal. As a result, ‘The Persistence’, for a point of reference, comes across as sounding not dissimilar to Riverside, with ten songs riven with melancholy and sparsely infused with flourishes of hope.

First impressions indicate that it’s not as immediately accessible as its predecessors. ‘Phlegethon’ (2010), ‘In Crescendo’ (2013) and ‘Eidos’ (2015) make up what the band call their ‘life’ trilogy and, possibly, as such, are imbued more with a sense of purpose than a sense of misgiving. But don’t take that as a negative. Dark and unmalleable, ‘The Persistence’ is not an easy listen, but therein lies its majesty. It’s an album that takes a while to get acquainted with – possibly an unwitting interpretation of its title – and it demands attention, but repeated plays will allow such riches to unfold. ‘Everything Goes’ and ‘Night’s Descending’ in particular bear the hallmark of a band of sublime skill and musicianship, the relentless ‘Every Broken Piece Of Me’ is a song of boundless ambition, and the title track itself is a tour de force

Brooding but beautiful, ‘The Persistence’ is a hugely creative album for which the band should be widely lauded. Where they go from here is anyone’s guess – but it’s going to be fun finding out. Vinyl fans incidentally should note that the fourth side of the record is given over to three live cuts – ‘Timeshift Box’, ‘Fading Out Pt.III’ and ‘Phlegethon’ – recorded at ProgPower USA.