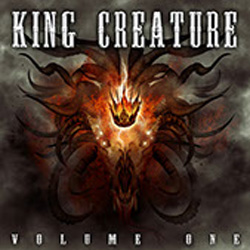 Vibrant, Cornish and endorsed by Lemmy, King Creature are a four-piece formed in 2013 whose debut album Volume One is a blistering riposte to the ‘rock is dead’ brigade – which is probably the very reason they were picked by Mr Kilmister to open for Motörhead at the Eden Project in June 2015. Despite the arrogance of youth and swagger aplenty, however, vocalist/bassist Dave Kellaway, lead guitarist Dave Evans, guitarist Matt K Vincent and drummer Jack Sutton-Bassett are apparently musicians with old heads on young shoulders, as the album they’ve created could be the envy of many a more established band. The material is finely crafted, the playing is flawless throughout, and without wishing to highlight just one of the four, that boy Evans certainly knows a thing or two about the dynamics of a great guitar solo.

In the main the songs fall into two camps, either boasting luscious melodies and vocal harmonies reminiscent of Alice In Chains ('Can’t Be Saved', 'Lowlife') or hardnosed pugilists ('Power', 'King For A Day') with 'The Pusher' sounding not unlike something Ghost might have come up with.

'Volume One' isn’t a perfect polished diamond, as it does get a little repetitive at times and is probably one track (the lighters-in-the-air 'Can You Forgive Me', despite its lead break) too long. But it’s wonderfully adroit, immaculately executed, and serves notice that this is a band who want to take it all the way, and have the chops to do it, too.