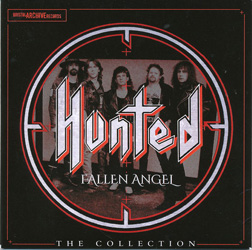 It’s hard to know whether Bristol, my adopted home for twenty-two years, was just behind the times or deliberately fighting a rearguard battle in the cause of traditional British metal, but in the early Nineties, with grunge knocking at the door, the city appeared to pull up the drawbridge and for a while at least held out as the last bastion of the soon-to-be dispossessed. With bands like Devious and Brabazon manning the barricades, the big guns were undoubtedly Hunted. Unfortunately, though, Hunted were never destined to be anything more than a big fish in a small pool. Formed in 1992 by Bob Starling, who’d already had a taste of cult stardom with Bristol NWOBHMers Stormtrooper, theirs was a story of demos, a well-received EP recorded in 1993 entitled ‘Streets Of Fire’, disappointments, and the worm dangled on RCA’s fishing hook that led to sessions for an album called ‘Crawl’ but ultimately came to nothing.

Musically, Hunted trod the same path as the likes of, say, Little Angels, Kiss Of The Gypsy and Skin, and played goodtime rock ’n’ roll that was never going to change the world to people who couldn’t change it anyway but wanted to have fun for an hour or so. On stage they were a true powerhouse, and although they never quite captured that excitement in the studio you can still get a feel for a great live band they were. The band’s material is fun but still exquisitely executed, with huge singalong choruses and memorable hooks – check out ‘Judgement’ or the evergreen ‘Three Wise Monkeys – and when they go for the twin guitar leads as in ‘Fallen Angel’ or ‘Streets Of Fire’ everything else is insignificant. ‘Destiny’ is as Def Leppard as you can get without upping sticks to Sheffield, and on this collection they certainly save the best for last, with the brooding ‘Swing Of The Pendulum’ repositioning the band firmly into epic territory with a song that’s primetime NWOBHM and sounds like something Elixir might have done – yes, it is that good!

Inevitably, of course, grunge tightened its grip on the city and before long music fans were all wearing paid shirts and looking miserable. But metal is forever, as Primal Fear once said, so survived the young pups’ onslaught, but by then it was too late for Hunted and the rest of Bristol’s trad metal defenders of the faith. This collection is as close as you can get to a trip in a time machine as possible, and there’s a whole lot more from the band available on download. Take your credit card to www.bristolarchiverecords.com and relive the good times.