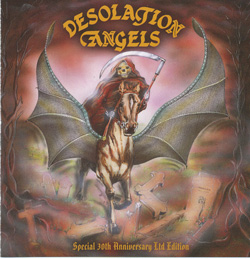 Following their well-received 1983 7” ‘Valhalla’ London’s Desolation Angels recorded their self-titled debut album in 1984, the year Venom headlined Hammersmith Odeon; but record company problems meant that by the time it finally saw the light of day two years later Bon Jovi were doing four sell-out nights at the same venue and the metal music world was a very different place indeed. As such, what would have been a sterling NWOBHM release was overshadowed by poodle-permed rockers on the one side and thrash metal maniacs on the other, and with the music press unsympathetic to the NWOBHM’s heritage the album’s fate was pretty much sealed the moment it was released. ‘Desolation Angels’ deserved better at the time, and a slightly-belated thirtieth anniversary edition has finally made the album available once more.

For a point of reference the band – vocalist Dave Wall, guitarists Robin Brancher and Keith Sharp, bassist Joe Larner and drummer Brett Robertson – sound something like Sabbath genetically spliced with Maiden. Songs evolve unhurriedly over time – eight cuts in forty-four minutes indicates that the band weren’t in any hurry to curtail their songs before they’d said their piece – with strong, solid riffs underpinning some intensely heavy (for the time) material as evidenced in opener ‘Spirit Of the Deep’ and ‘Wild Gypsy Woman’. The supercharged ‘Death Machine’ takes things up a pace, and when they wanted to come up with something catchy they weren’t short of ideas, as the toe-tapping shuffle ‘Unsung Hero’ proves.

However, whether you had the original album back in the day or not, what shifts this from an interesting re-issue to a must-have artefact is the inclusion of a sixty-minute live set from the Ruskin Arms in 1983, a year before the album was recorded. Malc McMillan points out in the ‘NWOBHM Encyclopedia’ that “these talented musicians were, from a very early stage, performing a repertoire of predominantly original compositions, several of which (‘Hounds Of Hell’, ‘Doomsday’, ‘Satan’s Child’, ‘No Mercy’ etc.) failed to make it to vinyl at any stage…” and indeed all four of these rare cuts are represented here, alongside non-album B-side ‘Boadicea’ and five eventual LP tracks. It’s a warts ‘n’ all set – no studio trickery here – rough as a badger and twice as brash, but it ably captures a great band comfortably doing their thing in front of a home crowd. Crank it up and relive the Glory Days…