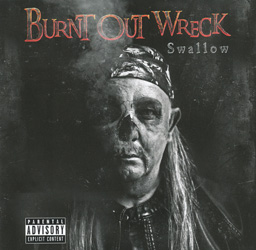 Gary Moat? Name ring a bell? Moat was of course the drummer of Heavy Pettin’ who, back in the day, were tipped as the Next Big Thing as the NWOBHM shone the spotlight on emerging UK talent. Perhaps unusually for a skinsman he was also heavily involved in the band’s songwriting – I’m not sure there is a Heavy Pettin’ cut that doesn’t feature his name on the credits – and so it’s perhaps no surprise that he’s back in business (albeit after seemingly many years MIA) with the new wonderfully named Burnt Out Wreck and a kick-ass self-penned album entitled ‘Swallow’.

Pulling a page out of the AC/DC songbook Burnt Out Wreck’s debut album is a paean to good time rock ‘n’ roll, and stomps and swaggers like the best of the Young brothers’ back catalogue. It’s ballsy, heads-down metal with a finger in the air and a take it or leave it attitude, best exemplified by the likes of ‘Rocking Man’, the hugely unsubtle ‘Pullin’ It Out’ or the impudent title track. On ‘Swallow’ Burnt Out Wreck are pretty much a project, with Adrian Dunn providing lead guitar and backing vocals and Moat himself handling vocals, guitars, bass and drums. Dunn’s runs and solos are particularly effective as they weave and flow throughout the solid backdrop of the album’s eleven cuts, and Moat’s vocals are hard as nails, complementing the album’s insolence.

Burnt Out Wreck have now taken on a life of their own, and a live band has already started terrorising PAs up and down the country with Moat and Dunn joined by bassist Alex Carmichael and drummer Paul Carnevale. And doesn’t that look like Soldier’s Miles Goodman clutching a Carlsberg on the website band photo? If there’s a gripe, it’s that the music world has moved on since Heavy Pettin’’s glory days, and lyrically ‘Swallow’ is rather one-dimensional. But with songs as strong as, say, ‘Talk About Love’, I wouldn’t allow that grumble to get in the way of letting this band show you a good time.