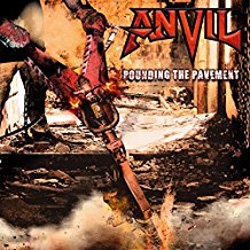 Anyone who’s seen the film ‘The Story Of Anvil’ will know it’s hard to see the Canadian band as anything other than the perennial underdog, an obstinate Pitbull fighting a tide of apathy, or maybe some kind of revolutionary waging a class war against mainstream mediocrity. ‘Pounding The Pavement’ (probably, given their tenacity and refusal to conform, the band’s most apt album title since 2002’s ‘Still Going Strong’) is the band’s seventeenth studio call to arms and, given that their back catalogue is a mixed bag in terms of consistency, certainly one of their strongest outings to date.

Over almost forty years the band have carved out a niche for themselves and in doing so have crafted a sound that is almost instantly recognisable. That said, a number of songs on offer, including the self-referential ‘Doing What I Want’, the goodtime rock ‘n’ roller ‘Rock That Shit’ and the adrenaline rush of ‘Black Smoke’, could all feature on latter-day Motörhead albums. But that’s not supposed to spoil the party, just an indication that, after all these years, vocalist/guitarist Lips and longstanding (or should that be longsuffering?) drummer Robb Reiner (together with bassist Christ) aren’t afraid to wear their influences on their sleeves. Elsewhere ‘Ego’ hurtles along like a dog in heat, the singalong ‘Let It Go’ will probably be hollered in hundreds of concert halls around the world and the instrumental title track is a heads-down smorgasbord of fretboard flurries and drum fills. And if ‘Nanook Of the North’ struggles under the weight of pretension in a laudable attempt to convey a lesson in Canadian history, at the other end of the scale chugalong riffer ‘Bitch In The Box’ must be metal’s first ever homage to satnav.