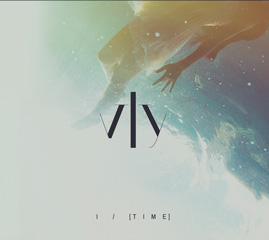 It would be over-egging the pudding a tad to describe Vly as a supergroup as such, but it’s a no stretch of the imagination to see the international five-piece as an energetic meeting of like-minded and extremely talented individuals. Coming at things from the progressive, Pink Floydian side of the street, with often-soaring but never overstated guitars and almost psychedelic, laid-back and unhurried vocals Vly can best be pigeon-holed by putting them in the ‘difficult to categorise’ pigeon-hole, although setting them up alongside, say, Riverside, might not be an unreasonable place to start.

Vly were initially the brainchild of Karl Demata, a British songwriter/guitarist with a CV which includes Crippled Black Phoenix and his own Karl Demata Band. Demata admits in the band’s biography that he had a few ideas and demos but nothing more. Through mutual contacts he was put in touch with vocalist Keith Gladysz (of Diet Kong and Typical Reptiles), and that’s where the fun started. Receiving files from Demata over the internet the New York-based Gladysz started weaving his magic over the top and the band began to evolve. Italian keyboard and synth player Elisa Montaldo (from Il Tempio Delle Clessidre) was signed up after Demata was bowled over by hearing her play: according to Demata her knowledge of “anything prog is simply remarkable,” and from her own standpoint “my idea of prog is somehow more vintage, more typical Seventies’ Italian style” which allows her to bring another dimension to the band’s sound. The rhythm section should need little introduction, with bassist Chris Heilmann (ex-Crippled Black Phoenix, Bernie Tormé, Shark Island) and drummer/keyboard player Mattias Olsson (ex-Änglagård. White Willow, Necromonkey) adding their own razamanaz to the songs.

In ‘I / [Time]’ the five musicians have crafted an engaging album of great depth and complexity. Swinging between almost ambient and gently soporific, endearingly poppy, or morose and challenging, ‘I / [Time]’ works on a number of different levels, and the more you listen to it – actually listen to it – the more secrets it’s willing to reveal. There’s no fillers on ‘I / [Time]’ as every composition adds a different facet to Vly’s approach to twenty-first century progressive music, so there’s much to be gained from attuning yourself to what is, fundamentally, a fabulous collection of beautifully-executed songs. But don’t expect quick wins. This is an album that won’t be rushed, and it demands you give it due attention and deference. Influences range from the aforementioned Pink Floyd (‘Silver Beaches’ and ‘Circles’ in particular) through to latter-day David Bowie (ironically most apparent in ‘Time’ – not a cover – and ‘Message In Water’) together with, as mentioned earlier, a nod to Poland’s finest progressive band. But these are just points of reference, serving merely to whet your appetite, and are not meant to detract from what is an exciting, engaging and haunting twelve-song set from a talented and exhilarating new band. What’s not to like?