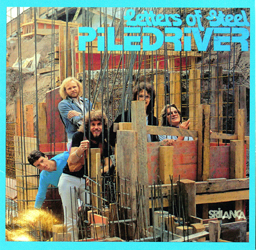 “‘Letters Of Steel’ is the perfect sounding missing link between Seventies’ rock and heavy metal,” runs the blurb on the back of the album. That’s actually a tad hyperbolic, given that it’s pretty much impossible to tell where the line falls between rock and metal anyway, and that ‘Letters Of Steel’ is by no means a link between the two, but the fact remains that however you want to slice it this is a pretty solid album from an energetic young German band.

It’s always interesting to draw parallels across the music world, and while in the UK we were all getting excited about Iron Maiden, Witchfynde and so many other NWOBHM acts, in Germany bands like Piledriver were also flexing their muscles. The band – vocalist Martin Metzger, guitarists Rolf Krämer and Georg Schneider, bassist Jürgen Möck and drummer Peter Wirkner – spent the last week of June and the first week of July 1980 in the studio, emerging back into the daylight with ‘Letters Of Steel’, their sole album originally released in Germany by GAMA imprint Sri Lanka later in the year. Unfortunately, just after the album’s release Metzger was called up for army service and although the band staggered on with a female singer for a couple of years they recorded nothing more and split in 1982.

On the evidence of ‘Letters Of Steel’, Piledriver were doing pretty much what the likes of Nazareth and Status Quo were doing in 1973 – but then again, I guess there’s a clue in the name. Metal thrashin’ mad it is not, as the songs are very deeply rooted in the Seventies (although ‘Hell Rider’ does crank it up a bit), but that’s not to say that the album doesn’t possess a certain grace and charm. Songs like guitar-oriented ‘UFO-Man’, the jaunty ‘Hobo’ and ‘New England’ with its harmony guitar work all breeze by like a summer’s day, and although even with remastering for this re-issue the production won’t ever win any awards ‘Letters Of Steel’ is an interesting little curio and should certainly be of interest to rock and metal musicquarians everywhere.