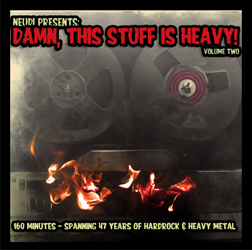 “Hi mate,” emailed Snatch-Back’s Ste Byatt one morning, “you may like this. Can’t believe our little St Helens, Merseyside, band Snatch-Back are living the dream of a compilation CD with KISS and Anthrax!” The compilation in question is ‘Damn, This Stuff Is Heavy Vol. Two’ which, naturally, follows on where last year’s ‘Damn, This Stuff Is Heavy’ left off, although this time round it’s an expansive double CD – so twice as many bands and twice as much excitement. I’ve always been a sucker for compilations and samplers anyway, but I always find that albums like this are just like digging for treasure. You know it’s there, and are just waiting to see – or, in this case, hear – what’s about to be unearthed.

So while Anthrax and KISS are the big guns which kick things off, albeit with less obvious cuts (‘Medusa’ and ‘Strange Ways’ respectively, both personal favourites of compiler, drummer A&R guy and metal all-rounder Neudi), once they’ve been despatched the album’s a romp through another thirty-four acts which, with the exception of Angel, are more underground than the Circle Line. There’s NWOBHM (Stormchild and Troyen), post-NWOBHM (Jameson Raid’s ‘I’m Not Waiting For You’ from 2014; the aforementioned 2016 cut from Snatch-Back, ‘Rough Treatment’), Eighties’ American metal (Shock Paris, Blind Illusion) and Euro metal (Vulcain, Rage), latter-day material from the likes of Ice War and Säcrificer... It’s an amazing collection of gems, neatly packaged up in one collection. The first volume was good, but this is excellent. Can’t wait for ‘Vol. Three’. 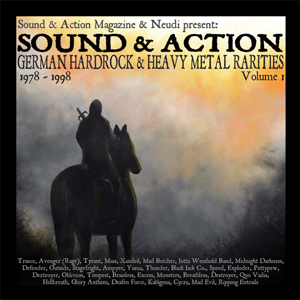 From the same label comes ‘Sound & Action Vol.1 – German Hardrock & Heavy Metal Rarities’, another double CD co-complied by Oliver Butz from Sound & Action magazine and that man Neudi again. Now, here’s an interesting statistic: Metallica’s self-titled 1991 mega-seller has sold something like 600,000 copies in the UK, and two million copies in Germany. Once the NWOBHM had blown itself out the European homeland of metal over time shifted from the UK to Germany, and listening to this thirty-five track compilation it’s little wonder. For those of us whose knowledge of German metal doesn’t extend much beyond the Big Boys like Accept and Scorpions (good though they are), and for metal musicquarians everywhere, this is a fabulous introduction to what was going on across the Channel while we here in the UK were all obsessed with the NWOBHM and following influx of American thrashers and poodle perms. There’s a few familiar names here – Trance, Mass and Tyrant jump out – but elsewhere there’s a lot to take in over a running time in excess of two-and-a-half hours, and to be fair I’m still digesting most of it. One definite stand-out though is the previously unreleased live cut ‘Teddy’ by the Jutta Weinhold band – a fabulously powerful slice of blues rock from the woman who’d go on to form the wonderfully underrated Zed Yago (whose sole UK trek, I believe, was in support of WASP in 1989) a few years later: it’s always a bit glib to say that something is worth the price of the album alone, but all credit to the compliers for including this nugget of pure gold together with the contrasting track that follows, the NWOBHM-infused and frenetically played ‘City Geek’ by Stuttgart’s Thunder, complete with Vardis-style soloing. What's not to like?