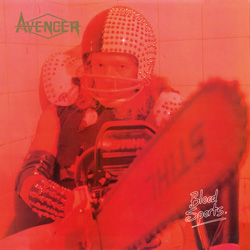 Despite its difficult birth, ‘Blood Sports’ is one of the last true great albums of the NWOBHM from one of the genre’s unsung heroes. Avenger was formed by ex-Blitzkrieg members Brian Ross (vocals) and Mick Moore (bass), although a failure of communication between the pair led to the singer leaving after the recording – but before the release of – the band’s debut 7” ‘Too Wild To Tame’. Ross immediately joined Satan, and their deposed singer Ian Davison Swift hooked up with Moore, drummer Gary Young and guitarist John Brownless (soon to be asked to close the door on the way out) and Les Cheetham.

As a four-piece Avenger spent March April 1984 in Neat’s Impulse Studios and ‘Blood Sports’ was released in the September. Blighted by a muddy production – Impulse’s Martin Smith didn’t really do any Neat band any favours – and saddled with a terrible review from a Kerrang! scribe who’d admit, many years later, that he was wrong, Avenger’s debut LP struggled to get the attention it warranted; a shame, as it’s a terrific album, exciting and diverse and as British as a bulldog chewing a steak and kidney pudding in the rain. From head-down opener ‘Enforcer’ to movie-inspired set closer ‘Night Of The Jackal’ ‘Blood Sports’ is a feeding frenzy of great metal licks and riffs, executed by a band with both purpose and drive. A re-recording of ‘On The Rocks’ (the debut single’s flipside) makes for interesting comparisons between the singers, and a cover of Montrose’s lesser-known ‘Matriarch’ pays homage to the band’s influences. The metal scene was beginning to change, as the incoming tide of US metal was swamping the market, yet ‘Blood Sports’ stood proud as one of the NWOBHM’s last great throws of the dice. 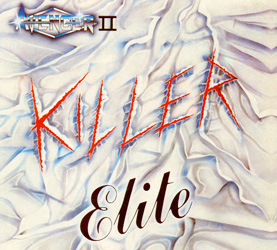 Fast-forward a couple of years and ‘Killer Elite’ – in a nod to some US releases the title is actually ‘Avenger II – Killer Elite’ – saw the band reborn with a wholly different mindset and the aim of repositioning themselves in the eye of the US metal storm. Gone was Cheetham, and in his place stood Greg Reiter, an American axeman whose recruitment through an advert in Kerrang! gave the band a more contemporaneous sound, style and direction. Frenetic and gloriously escapist, ‘Killer Elite’ is a kick-ass metal roller-coaster and the perfect snapshot of mid-Eighties metal: the opening coupling of ‘Revenge Attack’ and ‘Run For Your Life’ capture the speed metal zeitgeist, ‘Face To the Ground’ stomps along like a Teutonic metal-fest and ‘M.M. 85’ (featuring the boys from Warfare) and ‘Sawmill’ dabble in proto-thrash. Kerrang! awarded ’Killer Elite’ a belated but credible three-star review in March 1986, possibly the highest score given to a band not called Raven or Venom, and the album took Avenger to the States, but after the tour the band fell apart. A shame, as it would have been fascinating to see where Swift, Reiter, Moore and Young would have gone from there; that question wouldn’t be answered until 2014, when a new-look Avenger featuring Swift and Young (joined by guitarists Liam Thompson and Sean Jefferies and bassist Ian Fulton) unveiled ‘The Slaughter Never Stops’.

Both albums are rounded out with bonus tracks. ‘Blood Sports’ adds ‘Love’s Too Late’ from their 1982 demo with Brian Ross and a 1983 demo version of ‘Enforcer’ (as well as the ‘Hot ‘N’ Heavy Express’ jingle – Avenger’s song on Neat’s ‘One Take No Dubs’ EP was inspired by the radio show), while ‘Killer Elite’ runs out with ‘Rough Ride’ from the 1983 demo and a radio version of ‘Brand Of Torture’. Essential purchases; trust me on this.